Mystery of the Night :: Story

-Spaceship! It’s ours. Come on in. all of you, said her brother. She was two years old again. She loved this Spaceship game. They would sit in their parents’ blanket, roll it up around themselves, and her brother would pilot it. He would shake’em all up as if they were floating in space.

-The blanket was rolled over her stomach. She was sweating, feeling extremely hot. She pushed the blanket aside and let out a long sigh. Closing her eyes, she went into the shavasana mudra to relax herself. A memory from childhood coming as a dream, huh! That’s pretty cool, she thought.

Suddenly, she felt that thing one feels when something is not right. Something was not right in her room. Slowly, she opened her eyes.

There it was. Near the foot of her bed. Not belonging, out of place, a stranger, the enemy of darkness –a faint hint of green light. Her usual, normal, dark room playing host to a faint green light. Occasionally, an orange light gave it company. Together, the green and orange flickered sometimes. The green, however was firm and fixed in its presence, encroaching upon the darkness of her room
Its origin – unknown.
Its source – unidentified.
Its purpose – undefined. 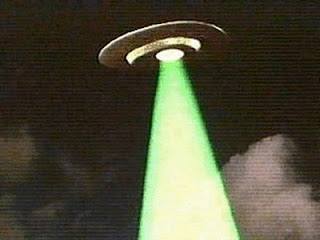 ‘A SPACESHIP!!!’ was her first thought.

She pictured a flying saucer floating outside in her patio; its circumference adorned with tiny green bulbs gleaming majestically. Their light, crawling through her window, endorsing a privileged glow inside. She followed the faint green near the foot of her bed but it didn’t seem to be coming through her window. Disappointment flooded her body. Oddly, the disappointment made her want to find the source of this green encroacher.

She looked around the room, her face half covered by her blanket and noted the details of this mysterious light. It was a gradient with green on the right fading to black darkness towards the left. She followed the faint green path, but a chair blocked her view. Ever so slowly, she shifted the blanket aside and lifted her neck up. But, her view was still blocked.

She pushed herself up with force and followed the green light to the ground, hoping to find the tiny alien but the light didn’t seem to originate there. ‘What if that alien can fly?’ she thought and immediately shot her eyes upwards, performing a microscopic examination of the aerial zone covered in that faint green.
Nothing there.

A mysterious flickering light, a mysterious buzz – what if it’s a BOMB???
‘O God! I’m gonna die!’ she said to herself. She thought about how wasted all her medals would be if she died. ‘O wait! Those’ll be blown up, too.’ She thought about her brother sleeping in the adjacent room and pictured him being blown to pieces; his blood and burned mass flying in the air, along with the debris, long after his death. She pictured the bomb with its green and orange flickering lights. Wires, so many of them around it. There was a timer (of course!). It read, ‘LIFE’ that flashed continuously. Yeah yeah! Life’s tickin’ away!

The thought of the destruction device filled her with the will to not die. She did not want to die because a fucking mysterious green light, and a fucking mysterious buzzing sound turned out to be an uninvited bomb, placed by some ugly, scaly alien whose spaceship was probably parked somewhere on her roof. If, and when she died, she wanted to face death, feel it consciously. No mysterious deaths for her tonight. No sir.

And so, she got down the bed.
Was she afraid? No.
Was she excited? No.
Was she nervous? No.
Was she determined? Yes.
Determined to get this over with. Too long had this fucking thing mystified her. Enough was enough.

She crossed the black zone of the gradient, soft legs hardly making a sound.
She crossed the bookshelf, its glass reflecting green.
She crossed the chair, its steel rods reflecting green.
Finally, she reached the end of the room. The green gradient was solid green, here. The light was at its brightest, most intense. Any minute now, and she would know! She felt that thing in her chest one feels when one is about to achieve something. The adrenaline pushed her, gave her the energy and she walked into the green.
And there it was.

Black and naked, its black enveloping the darkness around it. Three green eyes shining straight ahead, their light reflecting on the glass of her bookshelf. Another, orange eye opened and closed occasionally and everything would flicker when that happened. She stood there, not moving. Her eyes saw it. The mystery was solved and that irritated her.

It was no spaceship.
It was no alien.
It wasn’t even a bomb.
All she managed to say, ‘Stupid fucking WiFi router!’
Reality sucks.