Disclaimer—this is not about the state of brides in Islam. This is my personal point of view on marriage traditions & customs I have seen happening in Muslim families. This post has no religious backdrop to it. It is about the freedom of choices given to brides and grooms in Muslim families (of Hyderabad).

Last week I read an article—Does our marriage system turn a woman into a feminist? The article talked about the traditions in Hindu weddings being patriarchal and forcing women to become feminists. It got me thinking about the traditions in Muslim weddings. Nothing in particular stood out to being that way. I was wrong. My brother’s wedding is coming up and for the first time, I am participating in almost all the stages of planning. Most traditions have no logic and their origin is unknown. Yet, these traditions seem to be “just how it’s done in weddings.” That sort of reasoning is bound to irritate a person and, now I remember why I didn’t like to involve myself in wedding preparations before. A few days ago, my mother and I were talking on selecting the wedding dress for the bride. I found out some more about this "tradition".

The Hyderabadi tradition is that the groom’s family gets the bride’s dress and, the bride’s family gets the groom's. An entire posse from the groom’s family goes to select the bridal outfit. It’s a big deal and everyone makes sure to contribute to the cause of spending as much money as possible. Why else did the boy get all those degrees and worked hard to earn that much money, if not to spend on his wedding preparations, right? So, the groom’s mother, sisters, aunts, little nieces and cousins head to the store. Each one has her own idea of what would look good on the bride. The groom’s sisters seem to be the heralds of their brother’s choice hence their voice must be heard. The mother is of the opinion that it’s her “son’s” wedding so she should have the final say. The others bring the audiences’ opinion in that they tell what the guests would think of the outfit, because obviously the wedding is to impress the guests and not because it’s going to be the union of two people. In all this hulla, no one bothers to think about the bride’s choice. Sure, they’d think about her complexion and what colour would complement it, “Bachi achha gooooori hai. Tamata colour khul k aata uspe ji.”

Now, it’s sweet that the groom’s family wants to get the wedding dress for the bride. But, why doesn’t anybody ask the bride what she’d want to wear? It’s HER wedding day! Seven years ago, when my sister was getting married, I remember she wanted to wear a khada-dupatta on her wedding day. But, her in-laws got her a sharara instead because that’s what her mother-in-law had selected for her earlier daughters-in-law. It’s good she thought about their feelings, but what about my sister’s feelings for her special day? The worst part was that her wedding dress wasn’t even her size! The least someone can do is to get the correct measurements and give a dress that fits. The issue here is that nobody gave my sister the option to speak on it. She had to settle with what was given.

You might think the same happens with the groom. Poor guy doesn’t get to choose his wedding outfit and has to settle for what his in-laws get for him. Wrong! The groom ALWAYS gets to choose—he chooses the colour, fabric, tailor, shoes, kurta, sherwani, coat, tie—everything. The bride’s family merely pays (or sometimes they don’t) for the stuff the groom selects (not because they ‘have’ to but because they ‘want’ to).

Am I making a big deal here? After all, it’s just a dress. Is it really? The wedding day is the most special day in a person’s life. Shouldn’t the bride and groom get to choose how they want things to be on that day? If the opinion of the groom and his mother, father, sisters, brothers, aunts, uncles, nieces, cousins and friends matters, why is a bride slut-shamed for having her own opinion? No, slut-shamed isn’t a harsh word here—brides who speak openly are not considered to have “sharm o’haya” that translates to one’s feeling of shyness, chastity, bashfulness, in English. “Dulhan ka matlab hi sharm o’ haya hai. Dulhan bole toh sharm se chup rehti.”—this is the thought process (over here). So, if a bride has an opinion and she speaks it aloud, she’s shameless. Rather, bold and possibly going to be a disaster for the family (Dulhan kitti tez hai nai ji). Can’t a bride have the “sharm o’ haya” while wearing something she likes? Apparently, not. 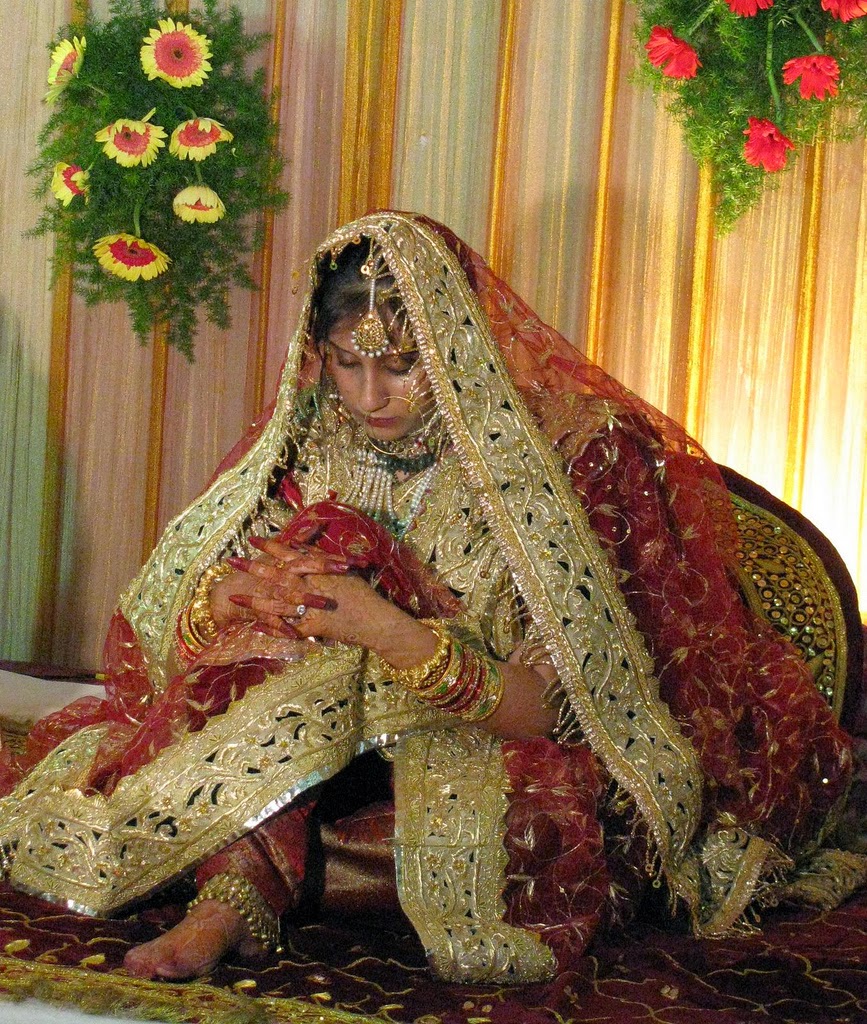 This practice of selecting the bride’s outfit happens in all levels of society. In theory, the tradition gives equal status to both genders but people changed it to suit their social conditioning of suppressing a woman's choice. The sad part is when it happens in families with educated backgrounds--educated women choosing this way for their sons’ brides. These people talk about women power but when the time comes, wouldn’t give a woman the freedom to choose for her own wedding day.