Five Things I Learned from India In Love by Ira Trivedi 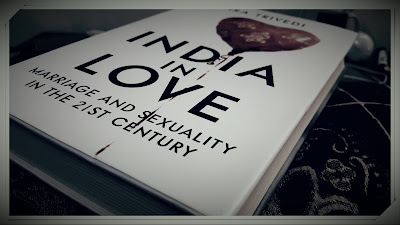 What stands out most in Ira Trivedi's first non-fiction book--it is a fierce, bold, honest documentation. I loved how she presented the situation as it is, without sugarcoating anything. She does not try to gravitate the reader to her perspective; we are free to derive our conclusions. Ira conducted extensive interviews, travelled across India and, in many cases, put herself in danger for the book. One can say she is a courageous woman which, in turn, reflects in her writing.

Proven researches corroborate the statistics mentioned [the name and year of the quoted research is mentioned at the end of the book]. When she does mention her point of view, she makes sure to put it as such and not state it as a fact (except for a couple of places).

Five things that stand out from India in Love: Marriage and Sexuality in the 21st century


1. There is no such thing as “Indian culture”
“People shouldn’t do [this or that]… It is against Indian culture”—what exactly is the Indian culture? Whatever the present “culture” is, it is a remnant of varied influences over the past 5000 plus years and, today we stick to the parts that seem to give us more control. 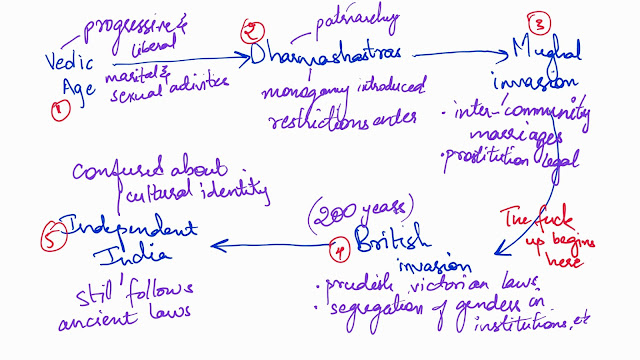 It is all about control.

Not only do we want to be in control of our lives but also, as we grow older we want to control the younger generations’ lives. The government wants to control everybody else’s’ lives. Owing to all the control everybody wants, we are sticking to the parts of our history that give us that—liberals quoting the progressive sexual and marital practices from Vedic ages, prudes quoting the stuck up manusmriti from the dharmashastras, the government sticking to the Victorian laws brought to India during the colonial rule.

And, while everybody just wants to get along, no one is quite willing to reform.

From all the stories she documented, it is evident—people are set in their ways and, not willing to change their mind-sets (especially the ones over 25).

Regardless of how open-minded or close-minded they are, they will stick to their versions of “what they think is correct” [and it won’t matter even if you make them aware how they can make their situation better through the reforms]

For example, in the chapter, Break-Up, which talks about the divorce scene in India, Ira is staying at one of her friends’ home. She knows Shiny (the friend) from the yoga retreat she attends every year. He is basically a good guy. Shiny is going through a second divorce. His first marriage was a love marriage in which, he convinced the girl to marry him despite knowing that the girl did not believe in the concept of marriage.


"Why did you try to convince her if you knew she never wanted to be married?" I ask.
“If you talk to any Indian girl, I’d say 70 per cent of them never want to get married. But ‘no’ means ‘yes’. It’ not a no no. if I had taken her at face value, we would’ve never gotten to be boyfriend-girlfriend. ..”


(Where did he get the 70% stat in his mind? Obviously, it is just his perception of things and he won’t change that.)

His second marriage was an arranged marriage.


“…but the second time around he changed his strategy, marrying strictly from the head. He had a checklist, and the woman who met his criteria would be the woman to marry.”

He presented the list of “duties” for the bride-to-be and married only the one who could agree to that.

“…he had peculiar, rigid views that didn’t seem to change despite his ‘worldly’ experiences. Shiny believes in what he calls the ‘Indian Vedic culture of life’. According to his interpretation, the scriptures say that a physical relationship is important only to have children. Good sex, Shiny feels, does not guarantee a good relationship. ..”


Despite his failed first marriage, Shiny was unwilling to change his thought process.
That’s how most of us are, too. Once we reach a certain age, we don’t easily give up our version of what is correct. We all want a better life, but unwilling to make those changes for it (of course we all will say we have our reasons).

The few of us who are fighting for reforms, equality, etc.—try as we might, it is quite impossible to get through to these sexist, misogynistic, patriarchal mind-sets.
So, is there no hope?
The way I can see, children are our only hope. Children are more open to learning and understanding new things. Children have that ability to accept new things without much resistance. That is why there is a greater need for educational reforms and sex education.


3. Progressive laws in India aren’t helping us much 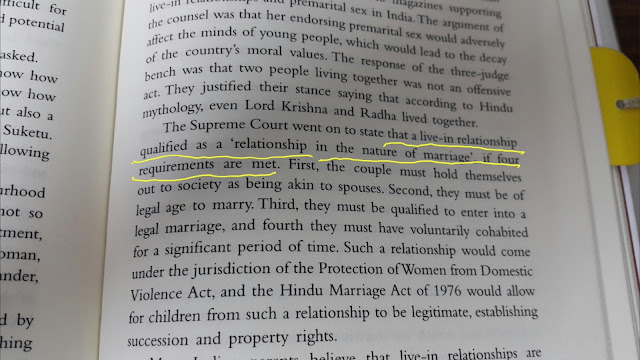 Abortion is legal in India (up to 12 weeks of pregnancy) for adult women, regardless of their marital status. Live-in relationships are legal in India (Supreme Court 2010). The Protection of Women from Domestic Violence Act (2005) has benefits to reap. Recently, the Criminal Law (Amendment) Act (2013) was passed owing to the increase in brutal (and other) sexual offences in the country.

However, to what extent are these laws benefiting ‘the common woman (and man)’? Aware/Unaware of the laws, how many societies accept live-in couples in their community? Can progressive laws help us when we are not ready to accept their help?

Are you thinking, ‘I don’t think like that. I have no problem with an unmarried 25 year old going for an abortion.’ Well, good for you. You are the tiny bit of India, whose screams are drowned by the hums of millions.


4. Sex education
Sex education is banned in educational institutions. However, sex education is not banned per se. Many NGOs, religious organisations and activists conduct sex education workshops but, there is no proper structure to these lessons. We need a standard lesson plan for sex-ed lessons, to be followed all across India—for both adults and children.


5. Shillong can be a really cool place to stay 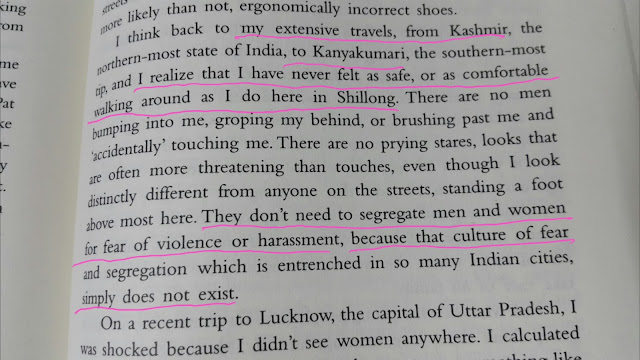 Check out details on the Khasi clan of Shillong and, you will know what I mean. Although, the clan faces problems of a different kind (alcoholism, etc.), their progressive laws and customs give proof of a world where, equality and freedom is possible.
My only problem with the book is the bad proofread by the publishers. Everything else makes it a definite must-read.
-