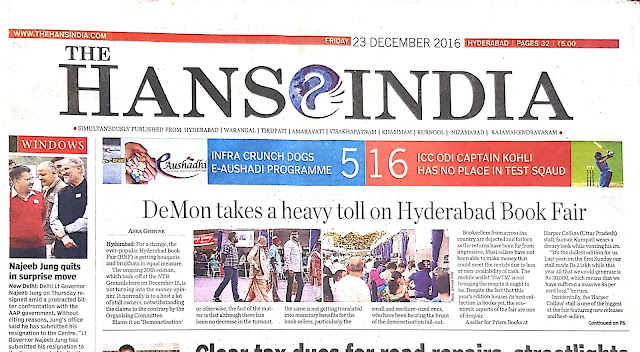 For a change, the ever-popular Hyderabad Book Fair (HBF) is getting bouquets and brickbats in equal measure. The ongoing 30th edition, which took-off at the NTR Grounds here on December 15, is not turning into the money-spinner.

It normally is to a host a lot of stall owners, notwithstanding the claims to the contrary by the Organising Committee.

Blame it on ‘Demonetisation’ or otherwise, the fact of the matter is that although there has been no decrease in the turnout, the same is not getting translated into monetary benefits for the book sellers, particularly the small and medium-sized ones, who have been bearing the brunt of the demonetisation fall-out.

Booksellers from across the country are dejected and forlorn as the returns have been far from impressive. Most sellers have not been able to make money that could meet the rentals due to less or non-availability of cash.

The mobile wallet ‘PayTM’ is not bringing the respite it ought to be. Despite the fact that this year’s edition houses its best collection in books yet, the economic aspects of the fair are one of despair.

“It’s the dullest edition for us. Last year, on the first Sunday our stall made Rs 2 lakh while this year all that we could generate is Rs 30,000, which means that we have suffered a massive 85 per cent loss,” he rues.

Incidentally, the Harper Collins’ stall is one of the biggest at the fair featuring new releases and best-sellers. Even they have not made the money required to meet the rentals of Rs 80,000. “We are facing tough competition from second-hand book sellers as well,” says Kumpati.

There are 280 stalls this year. Most have PoS machines and are accepting PayTM payments, but that does not seem to solve their problems.

A Mumbai-based seller Gyaneshwar N Kane of Book NX stall is furious with the unfortunate consequences of using PayTM. “The monthly limit is only Rs 20,000 for the mobile wallet and I made that amount at the end of the first day. I can’t proceed with further transactions unless that’s cleared and that will happen only at the end of the month,” he laments.

While the limit of PayTM increased to Rs 1 lakh on Wednesday, sellers have to face additional charges by the mobile wallet company when they transfer the amount to their bank accounts.

To make matters worse, servers and internet connectivity in the Wi-Fi-enabled area were a big let-down. However, General Secretary of HBF, Chandramohan has dismissed all claims of monetary problems.

“Of course, we had anticipated a fall in collections, but we haven’t received any such feedback from sellers,” he points out.

“I agree that small sellers might be having this problem. In fact, we provided two swiping machines in collaboration with State Bank of Hyderabad to sellers who could not arrange the same. We are transferring this amount to their accounts at the end of each day,” clarified Chandramohan.

Even as big lit-fests are getting cancelled across the country, HBF Society took a bold step by deciding to go ahead with the fair this year and increased the number of days to 12.

This article was first published for The Hans India