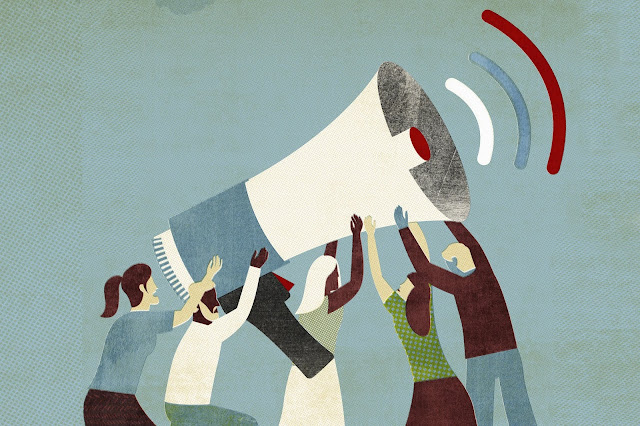 By now if you don’t know what the #MeToo campaign is, you’re living under a rock. It’s been over 10 days and it does not seem to fizz out. Here’s the thing - I don’t want to say #MeToo. This does not mean I have not been harassed, only that I don’t owe you my story.

For someone who has been actively involved in activism for the past five years, I am tired. Nay! Exhausted! Of shouting; trying to get my voice heard about everyday sexism, rape jokes, street sexual harassment, which for some ridiculous reason is continually trivialised by being referred as eve teasing. I’m exhausted that for every woman who shares her story there’s someone to challenge her claim. ‘Oh you’re only doing this to seek attention… to feed your narcissism,’ they say.

I’m exhausted of hearing, ‘But what about the men who’re harassed?’
I’m exhausted of the most nonsensical of all defences - ‘Not all men do this’. As if the revelation that one perpetrator abused someone suddenly implies that the entire male gender is at fault. What guilt are you masking behind that defence?
I’m exhausted that despite all the good, hard work countless people have put – and I come nowhere close to that – decision makers continue to stun us by things like not criminalising marital rape.
I’m exhausted that I don’t see any change in mind-set even in the informed and educated circles who continue to think it’s men vs. women; that the notion ‘women are their own worst enemies’ is true and not understanding the multi-layered patriarchal propaganda that pits us against each other. How do you not see it?

Should I feel guilty? Do I owe anything to the movement?


He told me, ‘You can’t back out. Especially, now! When #MeToo has crossed that invisible barrier and knocked on our (read men’s) threshold, without women trying for it. You can’t be exhausted now.’
Alright! I get it.

In three ways the campaign has been different from the countless ones before it, such as the #YesAllWomen (circa 2014), claiming #NotAllMen (2011-2013), Shitty Media Men (2017), #16DaysofActivism (1991 to present), etc. To scale the impact, within four days of the first use of #YesAllWomen, the hashtag had been tweeted 1.2 million times, surpassing predecessors that also drew attention to violence and sexism toward women. In comparison, #MeToo was re-tweeted half a million times in only 24 hours. On Facebook, the hashtag was used by over 4.7 million people in 12 million posts during that duration. The numbers continue to grow even after a week and people across the globe are united in the upraised revision of the claim.

This time it’s not a pointing of fingers, but a show of hands. No one’s naming their perpetrator, some are not even getting into the details of the abuse. It’s like actress Alyssa Milano tweeted, when she revived the campaign, ‘If all the women who’ve been sexually harassed or assaulted wrote ‘Me Too’ as a status, we might give people a sense of the magnitude of the problem.’ Milano reprised black activist, Tarana Burke’s decade-old call to unify sexual assault victims; women came together with one voice that said – I faced it, too.

Secondly, the campaign is not barred by age restrictions like before. It’s not only the digitally-savvy young adults sharing their stories. Women as old as 60-years and above are participating in it. Years of abuse piled up, a burden so heavy they bearded for generations, cramped in two words - #MeToo. They’re reliving the harassment of their life in a breath and coming out a little different than what they were after hitting that ‘post status’ or ‘tweet’ button. Empowerment can be felt at any age.

Finally - and this is a big one – for the first time men are talking about the magnitude of sexual harassment women face. Those uneasy glances at their female friends and colleagues, whispered conversations when we’re not looking, their all-male WhatsApp groups buzzing away - ‘Is it really as widespread as we’re learning it to be?’ the men are shocked.

Their shock surprises me. How could they not know, I wonder. But, of course they wouldn’t; it happens in a flash, goes unreported, no consequences whatsoever for the perpetrator. An unwanted look, a whistle, a catcall to women even when they are veiled, standing too close to her and invading personal space, an uncomfortable handshake that lingers for a few seconds too long, feeling her up when she’s had a drink or two, making your alcoholic state an excuse for coming on to her even when she said no, thinking that ‘women’s no is a yes’ – I’m only touching the tip of the iceberg here.

If it’s so widespread why didn’t you do anything before, they ask. Oh! We have! We were rattled in the beginning when it happened. As we grew older, we ignored it despite the fact that we expect it every time we walk out the door or not. We don’t accept it; we’re very angry. And, some of us are scared to even think of sharing it as if it’s somehow the survivors fault that you (the perpetrator) were brought up with stinky values.

Maybe I do owe it to myself to not be exhausted. Unlike other social-media activism, this isn’t a call to action, culminating in a series of protests and speeches. It’s an attempt to get people to understand the prevalence of sexual harassment. There may not be any policy-altering effect of #MeToo. Heck! There may not even be any change in mind-set for many.

But, for the first time in many years men have come up to us asking about it. We touched something in them without accusing or pointing fingers. They see us as people who go through something incomprehensible to the male privilege. But, they’re trying.

For the first time in many years men agree that #MeToo is not about the ‘what-about-isms’. No one is negating that men and trans-people go through harassment. No one is questioning each other’s magnitude of abuse faced. Yes, #NotAllMen harass, but men are close to knowing that #YesAllWomen have faced sexual harassment – big or small.

That’s enough of a victory for now.