Victims Once and Forever 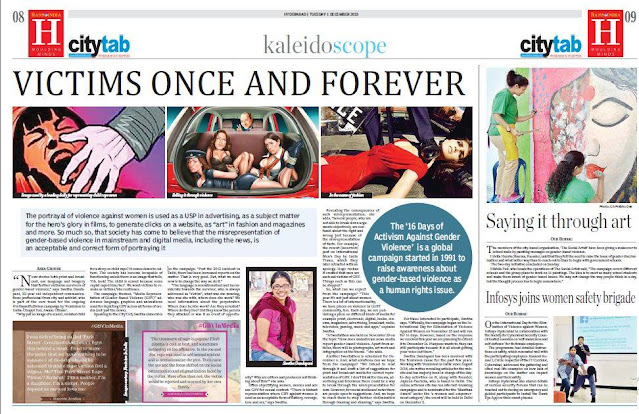 This article was first published for The Hans India
-

The portrayal of violence against women is used as a USP in advertising, as a subject matter for the hero’s glory in films, to generate clicks on a website, as “art” in fashion and magazines and more. So much so, that society has come to believe that the misrepresentation of gender-based violence in mainstream and digital media, including the news, is an acceptable and correct form of portraying it

“News stories both print and broadcast, use language and imagery that further victimise survivors of gender-based violence,” says Swetha Dandapani, 32-year old independent communications professional from city and activist, who is part of the core team for the ongoing #16DaysofActivism campaign by ‘Feminism in India: Chuppi Tod, Awaaz Uthaao’.
“Why put an image of a scared, violated child for a story on child rape? It comes down to culture. The society has become incapable of functioning unless there is an image that tells, ‘Oh, look! The child is scared because some rapist raped him/her’. We want victims to remain as victims,” she continues.

The ‘16 Days of Activism Against Gender Violence’ is a global campaign started in 1991 to raise awareness about gender-based violence as a human rights issue.

The campaign, themed, “Media Representation of Gender-Based Violence (GBV)” addresses language, graphics and animations used for depicting GBV across all forms of media (not just the news). Speaking to the CityTAB, Swetha elaborates on the campaign. “Post the 2012 incident in Delhi, there has been increased reports on the matter. That is very good. But, what we need now is to change the way we do it.”
“The language is sensationalised and inconsiderate towards the survivor, who is always addressed as “victim”; what was she wearing, who was she with, where does she work? We need information about the perpetrator. Where does he/she work? Are they arrested? Where do they live? Did they know the person they attacked or was it an event of opportunity? Why are editors and producers not thinking about this?” she asks.
Often objectifying women, movies and ads use GBV for sexual content. “There is blatant representation where GBV against women is used as an acceptable form of flattery, revenge, love and sex,” says Swetha.
Revealing the consequences of such misrepresentation, she adds, “Several people, who are not able to break down arguments objectively, are confused about the right and wrong just because of the misrepresentation of facts. For example, the recent (incorrect) post on International Men’s Day by India Times, which they later retracted with an apology. Huge ruckus it created that men are such sad victims of GBV. Things such as this can be stopped.”
So, what can we expect from the campaign? “This year it’s not just about women. There is a lot of intersectionality; we have pieces on violence in LGBT community, too. Each day, we are publishing a piece on different kinds of media for example print, electronic, digital, books, cinema, magazines, advertising, broadcast, radio, television, gaming, music and apps,” explains Swetha.
“A tweetathon was held on November 28 on the topic “How does mainstream news media report gender-based violence. Apart from articles, there will be photographs, art work and infographics on the theme. ” she adds.
Another tweetathon is scheduled for December 6. And, what solutions can we hope from the campaign? “We intend to read through it and draft a list of suggestions for print and broadcast media for correct representation of GBV. I don’t think for cinema, advertising and television there could be a way to break through the misrepresentation for now. However, for social media and news there are people open to suggestions. And, we hope to reach them to stop further victimisation through blaming and shaming,” says Swetha.
For those interested to participate, Swetha says, “Officially, the campaign began on the International Day for Elimination of Violence Against Women on November 25 and will run for 16 days. However, based on the response we received this year we are planning to extend it to December 16. If anyone wants to, they can still participate because it is all about getting your voice out there.”
Swetha Dandapani has been involved with the feminism cause for the past few years. Working with ‘Feminism in India’ since August 2014, she writes revealing articles for the website and has majorly been in-charge of the day-to-day activities on it, along with founder, Japleen Pasricha, who is based in Delhi. The online activism site has run internet-breaking campaigns and is nominated for the ‘Manthan Award’ under the ‘e-women and empowerment category’; the event will be held in Delhi on December 2.
Labels: Feminism feminism in india gender based violence Gender issues Hyderabad media representation miss representation publications