The Enchanting Curse of Harry Potter 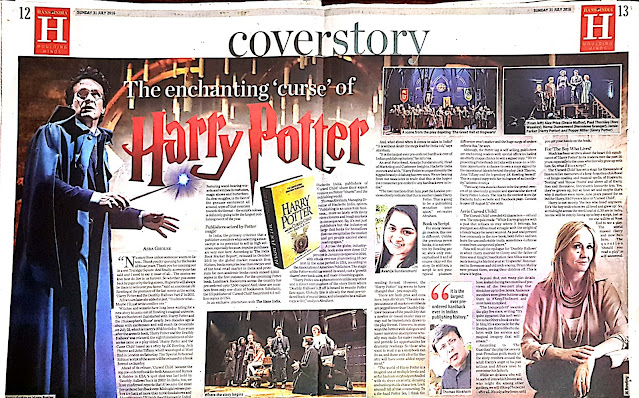 “No story lives unless someone wants to listen… Thank you for queuing for the books all those years. Thank you for camping out in a wet Trafalgar Square. And finally, as everyone has said and I need to say it most of all… The stories we love best do live in us forever.
So whether you come back by page or by the big screen, Hogwarts will always be there to welcome you home,” said an emotional JK Rowling at the premiere of the last movie in the series, ‘Harry Potter and the Deathly Hallows Part 2’ in 2011.
A few tears later she added in jest, “You know what… Maybe I’ll just write another one.”
Witches and wizards have long been waiting for a new story to come out of Rowling’s magical universe. The enchantment that started with ‘Harry Potter and the Philosopher’s Stone’ nearly two decades ago is abuzz with excitement and will reach its crescendo on July 31, which is Harry’s 37th birthday.
Nine years after the seventh book, ‘Harry Potter and the Deathly Hallows’ was released; the eighth installment of the series came as a play titled, ‘Harry Potter and the Curse Child’ based on a story by JK Rowling, Jack Thorne and John Tiffany, which was staged at West End in London on Saturday.
The ‘Special Rehearsal Edition’ script of the same will be released in a book format on Sunday. Ahead of its release, ‘Cursed Child’ became the top pre-ordered book for both Amazon and Barnes & Nobles in USA, a spot that was last held by ‘Deathly Hallows’ back in 2007.
In India, too, we have confirmed reports that it became the most pre-ordered hardback ever. Midnight release parties are back at more than 5,000 bookstores and libraries across US (wish they’d happen in India) featuring wand-bearing wizards and witches in costumes, magic shows and butterbeer.
So, dear muggles, in the face of the genuine excitement all around, wipe off that cynicism towards the format – the script’s release is definitely going to be the largest publishing event of the year.

In India, the primary criterion that a publisher considers while selecting a manuscript is its potential to sell in high volumes; especially because, impulse purchases are very rare here.
According to ‘The India Book Market Report’, released in October 2015 by the global market research firm Nielsen, books comprise less than one per cent of the total retail market in India and print-runs for non-academic books rarely exceed 2,000 copies in the first instance.
For the upcoming Potter book, Landmark Bookstores across the country has pre-ordered upto 7,500 copies! And, these are numbers from only one chain of bookstores. Scholastic, the US publisher of ‘Cursed Child’ has printed 4.5 million copies in USA.
In an exclusive interaction with The Hans India, Hachette India, publishers of ‘Cursed Child’ share their expert opinion on Potter “charm” and the publishing world. Thomas Abraham, Managing Director of Hachette India, opines, “Publishing is an uncertain business… more so lately with many store closures and tough markets in consequence.
So, it's not just publishers but the industry at large that looks for bestsellers that can recapitalise the market and get people excited about reading again.”
Read the full story here
Labels: Book Book Review Hachette India Harry Potter harry potter and the cursed child JK Rowling jkrowling publications publishing